What are struts (braces)? 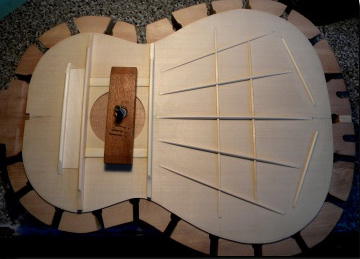 The struts are lengths of wood glued to the inside of the top (soundboard), which act to support the top against the tension of the strings, and to control the overall sound that the guitar produces. They are usually made of the same material as the top, although often cedar top guitars will have spruce struts.

By far the most common pattern used for the strutting is the fan brace system, so called because the struts are arranged somewhat like the ribs of a fan. The struts all radiate from a single point, usually somewhere around the 12th fret, although this point can vary significantly, making the struts more (or less) parallel to each other.

Before Torres popularised the fan bracing system (contrary to popular myth, he did not invent it) most guitars used a simple “ladder” bracing system – with just a few struts running across the soundboard, i.e. perpendicular to the grain direction.

Although the majority of guitars still use a variation of the fan bracing system, there have been a number of alternatives tried over recent years. Perhaps one of the more radical looking systems was that developed by Michael Kasha and Richard Schneider (see lower image). Dr. Kasha used his scientific training to develop an entirely new system of strutting, and Kasha and Schneider collaborated for many years on this design.

More recently, lattice bracing systems have become more popular, largely as a result of John Williams’ patronage of Greg Smallman guitars. The lattice system employs a number of crossed struts, usually joined at the intersections, to form a “lattice”. This form of strutting is very stiff, and can be made very light, and allows the top be made significantly thinner than on traditionally braced guitars. This can help to improve the efficiency of the instrument in generating sound, which can give the guitar more volume.

Lattice-braced guitars also tend to have a distinctive tone (which is not to everyone’s taste), but this is more a result of the lightness and stiffness of the top than the system of strutting itself.

Radial bracing systems have also been used, where each brace radiates out from the centre of the lower bout. Makers have experimented with other bracing systems, but at the moment variations on the fan bracing or lattice bracing systems are by far the most common.