I spent last weekend in Birmingham at the Royal Birmingham Conservatoire Guitar Festival hosted by Mark Ashford. The event combined concerts, masterclasses and workshops, and I took two guitars to exhibit, and a handful of students from Newark College, who had their own stand to exhibit their guitars and promote the guitar making course at Newark.

The students from Newark enjoyed the event, and I think gained a lot from the experience. One of the highlights for them was having both David Russell and Miloš Karadaglić play their guitars, give them some feedback and talk to them about all things classical guitar. David Russell showed the students his Dammann guitar, and other guitars he owns (including a recent spruce double-top guitar made by a former student of Newark College, Dennis Tolz).

I had just 2 guitars with me, the satinwood guitar featured in my previous blog post, and my “experimental” guitar with the wacky headstock, which I’ve brought out of retirement as I don’t have any other guitars available to exhibit at the moment. 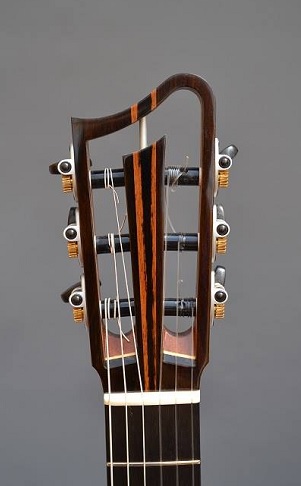 The experimental guitar always attracts a lot of interest, but players tend to be put off by the fact that it takes about 45 minutes to change the strings, and you can’t use a standard set, as the 3rd string needs to be much longer than a standard string. There was a lot of admiration for the satinwood guitar as well, but no buyers as yet (which is fine with me for now, as I have a few more exhibitions I want to take it to this year before selling it.) 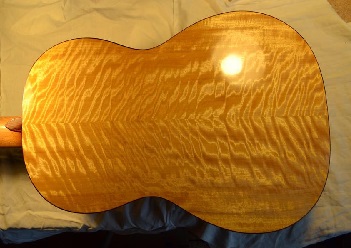