Some stuff about tonewoods…

What is a tonewood?

A tonewood is any timber that has appropriate acoustic properties for musical instrument making. In terms of tonewoods, by far the most critical part of a guitar is the top (soundboard).

There are a number of properties that a good tonewood should have. It should be stable and well-seasoned, so that no part of the finished guitar will warp or crack. They should have low damping, so that a minimum amount of the energy of the vibrating string is lost to heat. The tonewood used for the soundboard also needs to be light in weight, and cut so that the growth rings are perpendicular to the surface of the wood (quarter-sawn), and the gran runs parallel to the surface (long grain). This will give the top the best stiffness to weight ratio, making it both more responsive and more efficient. 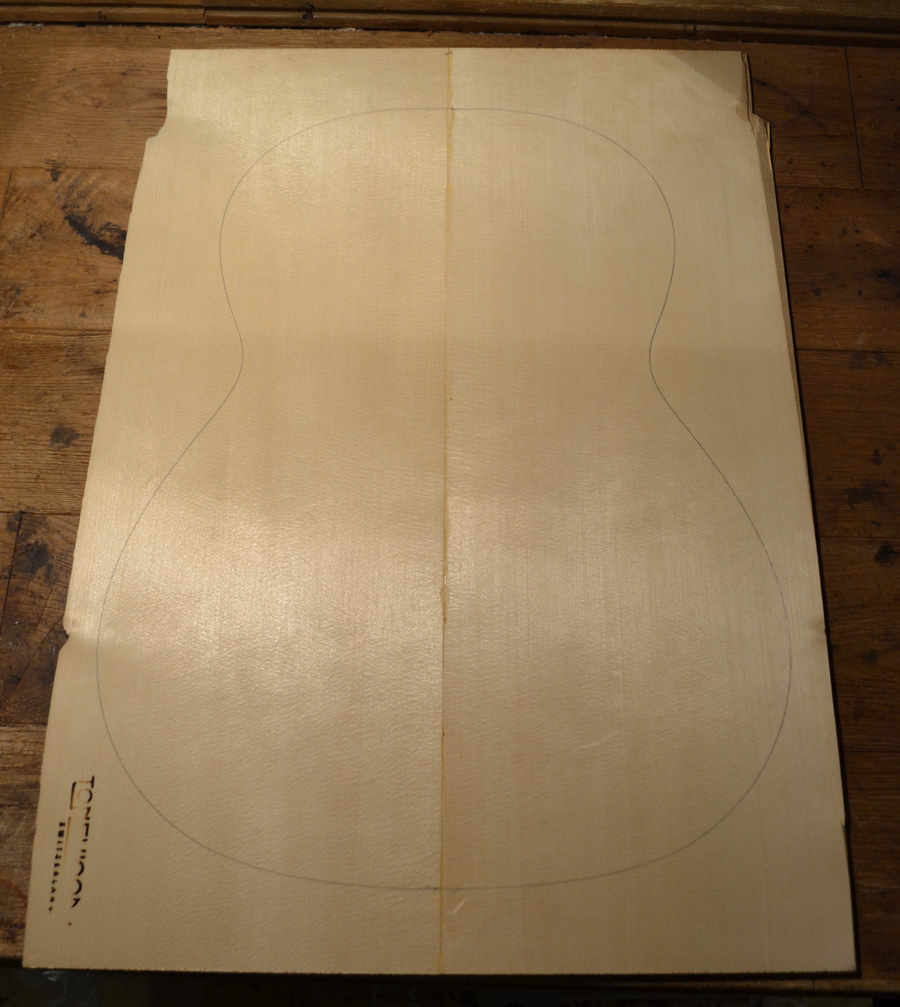 Most (but not all) tops are made from softwoods, and the majority are either spruce or cedar. Cedar is normally said to produce a guitar with a warmer, fuller sound, whereas spruce has good clarity and separation, and some say a more complex tone. As a player, I tend to prefer spruce guitars, as it’s usually possible to get a really warm tone from a good spruce guitar, but more difficult to get clarity from a cedar guitar. Note, however, that the differences are not as dramatic as many think – you might be surprised at how difficult it can be to distinguish a spruce guitar from a cedar guitar in a blind test. 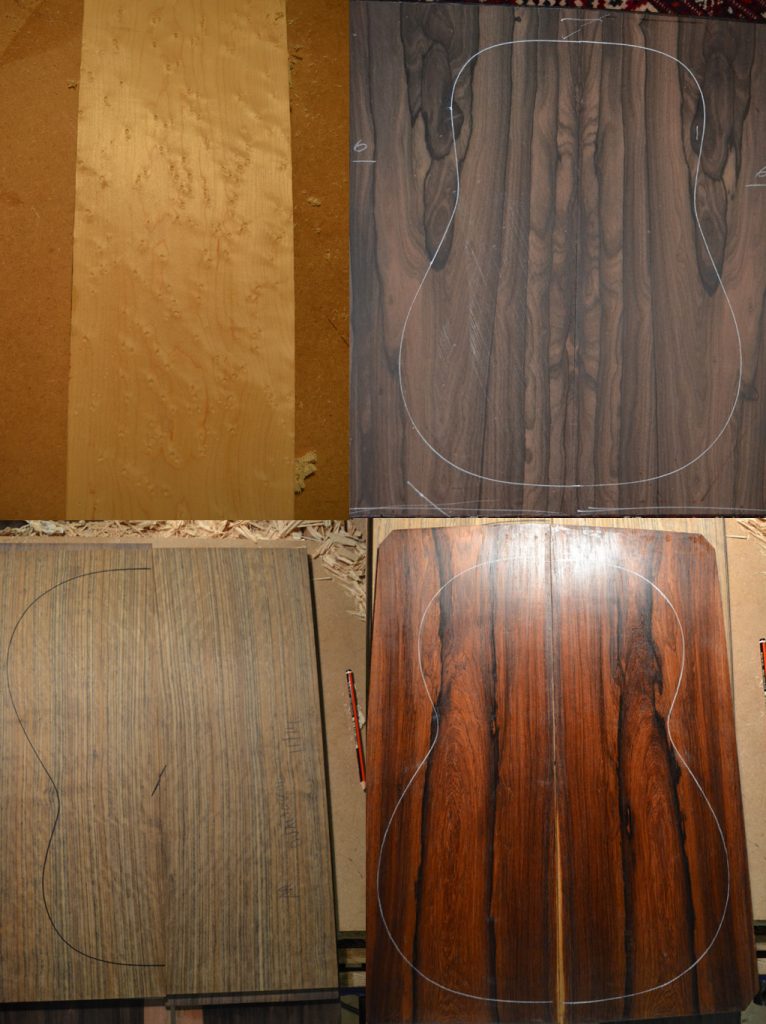 The tonewoods used for the back and sides of the guitar have less effect on the guitar’s tone than the top, but can still be significant. Probably the most common tonewood used is rosewood. Traditionally, Brazilian rosewood was believed to be the best, but many luthiers now prefer Indian rosewood – and not only because of its much lower cost. Indian rosewood is more stable then Brazilian (less prone to cracking) and some luthiers feel it gives the guitar a slightly warmer tonal quality.

An increasing concern is the availability, cost and environmental impact involved in using certain tonewoods, particularly tropical hardwoods. In January 2017, most rosewood species (dalbergia) were listed on Appendix II of CITES (The Convention of International Trade of Endangered Species). Brazilian rosewood (dalbergia nigra) has been listed under the much stricter controls of Appendix I since 1992. As a result, many luthiers are looking at “alternative” tonewoods, and some are offering guitars made with no tropical hardwoods, and/or no CITES listed woods. There are in fact a great number of hardwoods (and some softwoods) that have been used successfully for the backs and sides of classical guitars, and it is not really a significant problem for the luthier. The big issue is convincing players that guitars made from non-tropical woods can be as good as those made from tropical woods. The Leonardo Guitar Research Project has gone some way to demonstrating that few players or listeners can reliably distinguish between tropical and non-tropical guitars in blind tests. The project has also produced a list of luthiers making guitars with non-tropical woods, and the list is growing (Link). 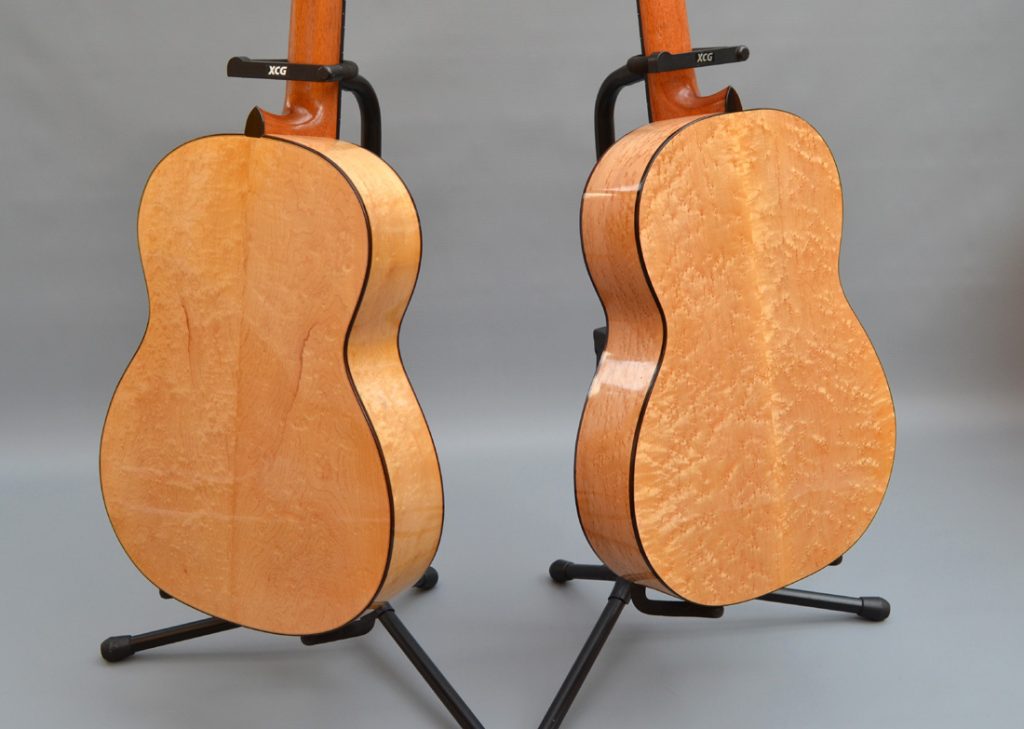 Non-tropical tonewoods that have been successfully used for the back and sides of classical guitars include maple, beech, plane, cherry, walnut and oak, and there are many others. Alternatives can also be found for necks, fingerboards and bridges.  I have recently built guitars with back, sides and necks of maple and walnut, fingerboards of bog oak and Rocklite (a sustainable wood-based material), and bridges of walnut and laburnum. Maple is probably my personal favourite tonewood. Bird’s-eye maple is an incredibly beautiful wood (see photo above), and gives the guitar what I describe as a ‘creamy’ tone (if that means anything) with sweet trebles and deep, warm basses.